The listserv venue is a forum for open conversation, debate, and suggestions. We hope that the listserv will continue to expand the ongoing conversation about policies concerning the humanities. We suggest usual listserv etiquette that takes into account the entire group who will receive your message, and we ask that messages be signed. We look forward to continuing the conversation with you.

You may subscribe to the HFC listserv by using our contact form here to request to be added to the list.  Any one who subscribes is welcome to post by sending an email to humanitiescollective@duke.edu .

If anyone has further suggestions of events and announcements to be included on the website, including resources about the humanities, please email Heather Wallace, HFC web coordinator. 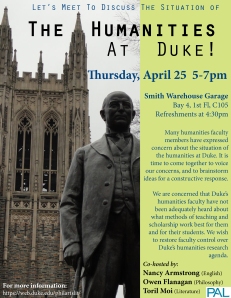